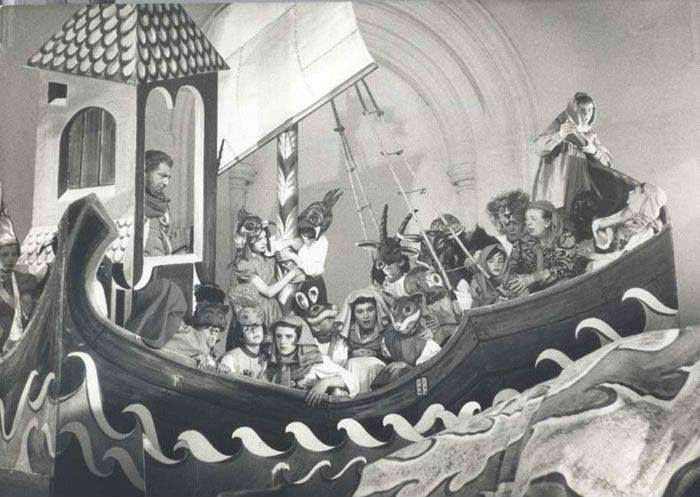 Noye’s Fludde is a short opera by the British composer Benjamin Britten, written to be performed in a church setting by a combination of amateur and professional musicians. It tells the story of Noah’s Ark, using the text of Chester’s Mystery Plays from 1375, hence the old-fashioned spelling of 'Noah's flood'.

The opera was first performed on 18 June, 1958 at that year's Aldeburgh Festival but from the beginning, Britten specified that the opera should be staged in churches or large halls, not in a theatre. He also always meant it to be performed by children and amateurs, with only the roles of Noye (Noah) and his wife being written to be sung by professionals. The same was true for the musicians, and the score features numerous unconventional instruments to provide particular musical effects, including bugle fanfares and handbell chimes.

Britten took his text primarily from a medieval English mystery or "miracle" play. These were dramatised Bible stories, traditionally performed by members of town guilds in market places on feast days. They covered a whole range of Biblical narratives. This story comes from the Chester cycle, one of only four to survive the 21st century.

The story of Noah and the flood, the third play in the Chester cycle, was originally performed by the city's water-carriers.An unfortunate feature of this play is the depiction of Noah's wife, and by implication women generally, as disobedient, obdurate and finally abusive! The last recorded performance of the play in medieval times was in 1575 in Chester. 500 years laters, the cycle was revived as part of the city's Festival of Britain celebrations in June, 1951.

By the time he wrote the piece, Benjamin Britten had estbalished himself as a leading English opera composer, with pieces such as 'Peter Grimes' and St Nicolas. In 1957, he was invited to write something for children by the then Head of Schools Broadcasting at Associated Rediffusion, Boris Ford. Britten had already been attracted by the mystery play text and eventually chose Noah and the Flood as a suitable subject. 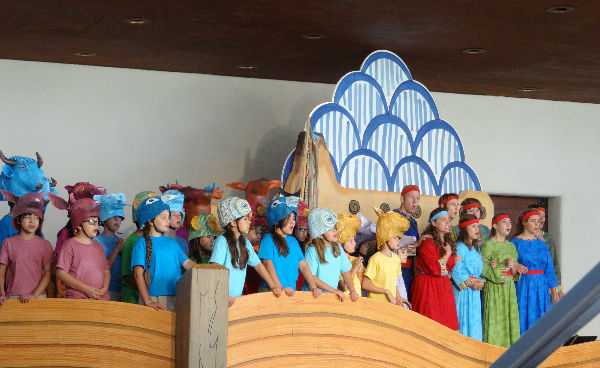 Britten began detailed planning for the opera in August ,1957, while sailing to Canada for a tour with the English Opera Group. He added three congregational hymns to the revised text, which we shall sing in our performance: "Lord Jesus, think on me"; "Eternal Father, strong to save"; and "The spacious firmament on high".Britten also introduced the repetitive Greek chant "Kyrie eleison" ("Lord, have mercy") at the entry of the animals, and "Alleluias" at their triumphant exit. He finally completed the opera in October, 1958 after moving to The Red House in Aldeburgh, where he would live for the rest of his life. He dedicated the piece to his nephews and nieces, and his godson, Ronald Duncan.

It has since been performed on numerous occasions across the UK and the world.