Putney Methodist Church has a fascinating history. Rev'd Leslie Farmer, the minister at the time, wrote a detailed history of the church at its centenary in 1970, which can be read in full here. In 20201, the church organist, David Armstrong, put together a fascinating exhibition for our 150th anniversary entitled 'Putney 1870'. You can read more details here.

The Wesleys in Putney 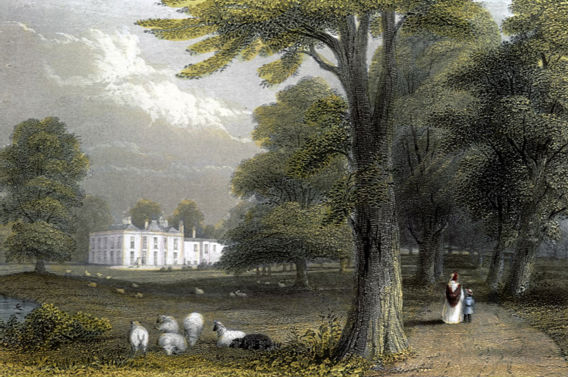 The founders of Methodism, John Wesley and his brother Charles Wesley, visited Putney on several occasions. (Although sadly not our church!) They came to visit William Law (1686-1761), who was an influential Anglican priest and evangelical theologian who resided between 1723-37 in Lime House, Putney, now demolished but formerly situated between East Putney and Putney Hill (pictured right). There he was engaged as tutor to Edward Gibbon. He was the father of the famous classical historian of the same name, who is commemorated on a blue plaque on Upper Richmond Road. Law is best known for his 1729 work A serious call to a devout and holy life.

John and Charles Wesley are known to have visited Law in Putney on multiple occasions between 1726 and 1732 prior to their ministry in the American colonies. Law is known to have profoundly influenced the young Wesleys, and has variously been described as the ‘grandfather of Methodism’, ‘our John the Baptist’, and as ‘Wesley’s oracle’. 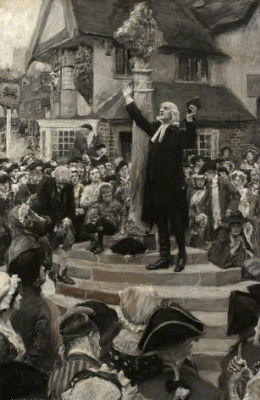 Methodism came to Wandsworth in the 1740s with John Wesley, the founder of the movement. He preached there on 14 November, to a small group of people, "with the rabble gathered on every side". Wesley continued to visit the area regularly until his last recorded visit in February, 1790. It took a little while for the new movement to spread to Putney, though, in fact until 1843. In that year, we know that Methodist services were being held in a rented room over a carpenter's shop near Walker's Place (just behind Putney High Street). The small group of Methodist worshippers met there for two years until a small Wesleyan chapel was established on Cooper's Arms Lane, subsequently known as the 'Hole in the Wall'. They were served by preachers from Wandsworth and Hammersmith, and by a number of young students from Richmond College - missionaries who would go out to serve the Methodist Church in every corner of the globe.

In 1869, thanks to the joint efforts of two leading local Wesleyan Methodists and businessmen, George Tidmarsh and Robert Davis, a first lease for the land on which the church is currently situated was obtained from Sir John Temple Leader, a landowner and philanthropist who owned much of the property between Putney Hill and today's West Putney. At that time, the Upper Richmond Road was a quiet, leafy lane, and Gwendolen Avenue did not yet exist - something that is hard to imagine today! The congregation was still very small and most of the houses that now line the streets around the church would not be built for another 20 to 30 years. It was a bold move indeed. The first building was a dual-purpose church and school room, officially opened on 13 October, 1870. 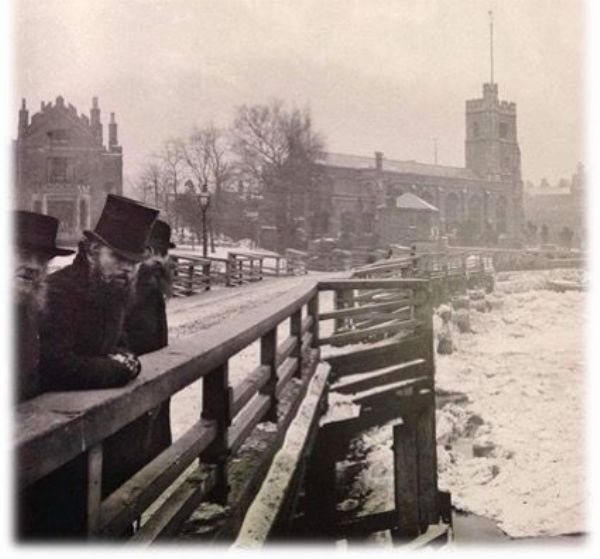 The River Thames frozen at Putney in 1870.

No images remain of this original building sadly but its rectangular outline does appear on contemporary maps, and fragments can still be seen in the passage between the present church and the neighbouring school building added later. Intriguingly, though, the great artist Vincent Van Gogh may have left us a clue.  In 1873, at the age of 20 (before adopting art as his profession) he came to live and work in London, initially for a Dutch art dealer. After a short spell in Paris, he returned in 1876 to work as a school teacher in Isleworth, but then decided his true calling lay with the ministry (his father was a protestant pastor).  He attended prayer meetings at the Methodist church in Richmond (in Kew Road, demolished), but then joined a congregational minister in Isleworth as his assistant, teaching, reading and occasionally preaching.  During this time he sketched the chapel where he worked at Turnham Green, but also a Wesleyan chapel in Petersham (on left below). This would have been exactly contemporary with our chapel in Putney, so he could have given us a clue as to what it may have looked like. 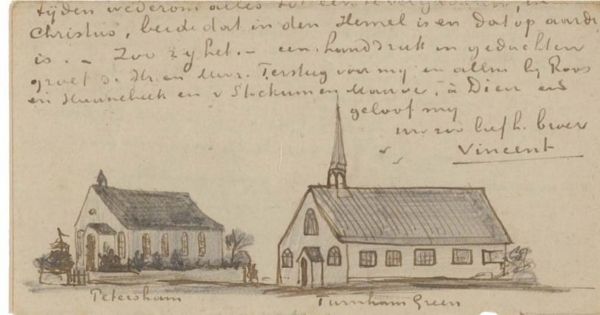 Initially, the church was served by a Home Missionary, and it was not until 1882 that the first minister was appointed, Rev'd J Charles Trafford.

Despite many setbacks, the congregation was determined to build a large new church to serve the growing community of Putney. With great faith and the aid of generous grants, the new building was officially opened on 4 May, 1882. Despite the fact that the society at that time only had a membership of about 67, the new church had seats for over a thousand, downstairs and in the gallery. It was widely admired at the time, and ever since, for its lofty tower and handsome Victorian Gothic features. It is now a Grade II listed building. The church developed its activities, numbers and buildings over the years, adding a schoolroom in 1896.

The congregation at Putney Methodist Church grew in the subsequent years. An organ was installed in 1887, class meetings (for the study of the Bible and mutual encouragement) were established, and the church took part in numerous philanthropic endeavours, including the employment of a nurse to serve the poorer parts of Wandsworth. The church was involved in one minor cause célèbre in 1885, when the minister, Rev'd George Dyson, became involved with a married woman, Mrs Adelaide Bartlett. Her husband was mysteriously found dead in what became known as the 'Pimlico Poisoning Mystery' and foul play was suspected, although murder was never proved. More details may be found here.

Like all communities it was deeply deeply affected by the events of World War I and the church's memorial tablet bears 21 names. Members of the church served all across the world, from the Western Front to the deserts of Arabia with Lawrence. The first name on the memorial, Captain Thomas Austin, was the son of the then minister, Rev'd George Austin. He was serving with the South Wales Borderers in Iraq when he died. For more details about our war memorial, see here. 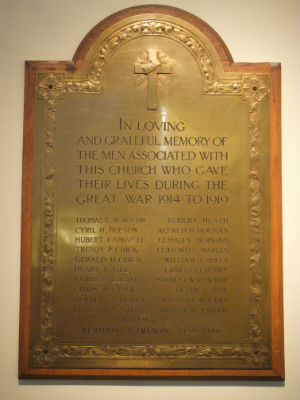 Later the church would be served by two army chaplains, the preacher William Tapper, who had been an army chaplain with General Allenby in Palestine, and the minister from 1937 to 1946, Rev'd Charles H Hodgson.

The inter-war years saw the church continue to flourish, as part of the Wandsworth Circuit. Rev'd Norman E Dando became superintendent of the Circuit in 1931 and oversaw the celebrations to mark the building's 50th anniversary. The headline in The Methodist Recorder marking the event was 'Methodism in Boat Race Town'. In 1932, with the re-union of the Methodist Church after years of division, 'Putney Wesleyan Methodist Church' became simply 'Putney Methodist Church'.

The tranquility of the church and its community was brought to an end by the Second World War. On the morning of 18 June, 1944, a V1 flying bomb fell directly opposite the church on the corner of Charlwood Road. Many people were killed and injured, and the church was used as a casualty clearing station. The building itself was rendered unusable by the blast for eight years, and the damage may still be seen. The congregation supported the community as best it could and continued to meet in the Sunday School hall next door.

After the war, the church was rebuilt, at a cost of £24,795, and re-dedicated on 6 September, 1952. Recently, we were sent a copy of the souvenir re-dedication programme for the services around the this event. You can see a copy of the fascinating document here. The very moving Foreword from the then Minister is reproduced below. 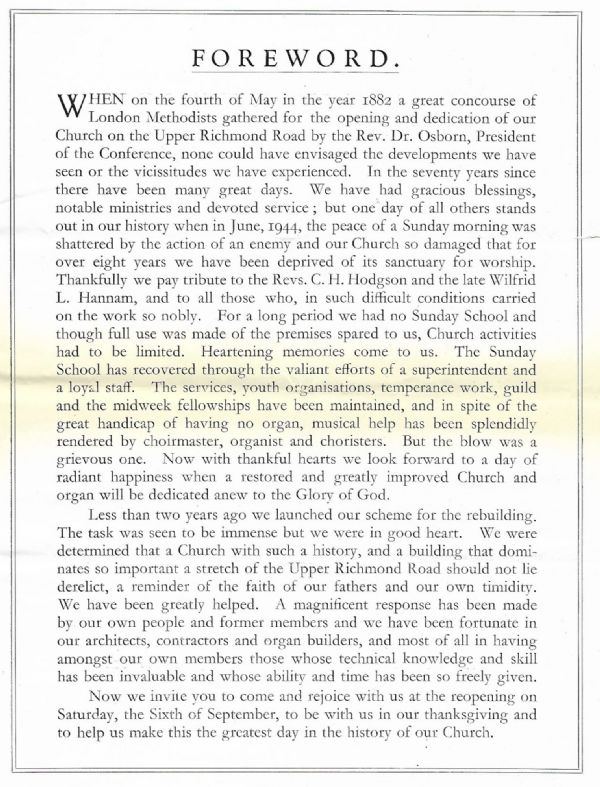 The Church was served by a number of dedicated lay people and able ministers, not least of whom was Rev'd Reginald Brighton, who helped create the local Council of Churches. Activities resumed and new ones taken up, to share the good news of Jesus Christ and to serve the local community.

The church has been delighted in recent years to welcome visitors and members from across the globe, reflecting the increasing diversity of London's population. A feature of the church is now our line of flags that greets visitors as they come in, demonstrating the wonderful breadth of God's Kingdom as seen here in Putney. 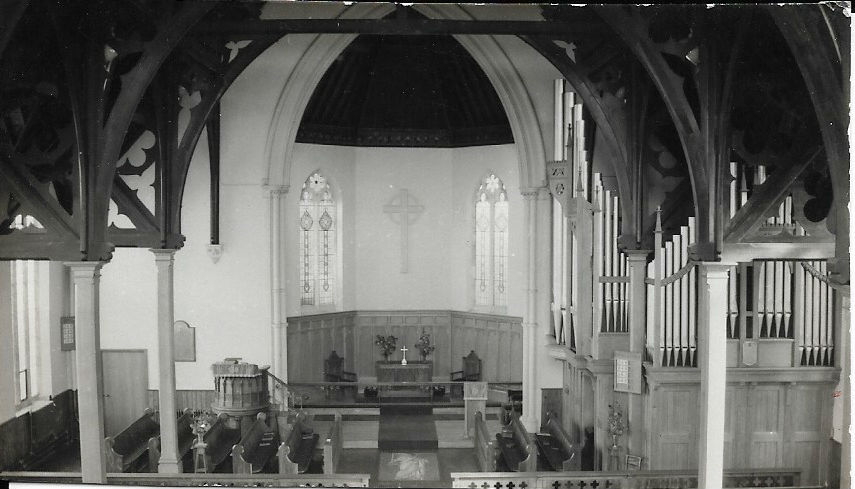 The greatest change to the church fabric after the war, came in 1993. After many years of debates, plans and schemes, the church was re-opened following a complete internal re-modelling. The pews and organ were removed and the open, more flexible worship space we now have was revealed. This transformation involved a huge amount of time, effort and dedication from all those involved, and its successful completion is a tribute to their faith and commitment. This was an incredible example of a sympathetic re-development of an old church building, that continues to be a blessing for the congregation and community today. 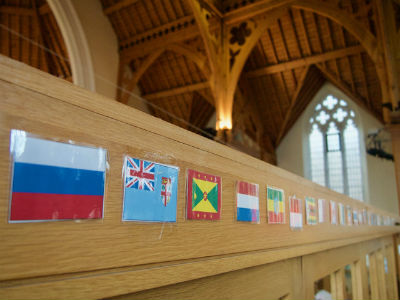 In 2020, the Church was due to celebrate the 150th anniversary of the erection of the first building on the current site. The anniversary year began well with a special production of Noye's Fludde, which involved people from a range of organisations and community groups, including Roehampton University. (See photo below.) However, of course, COVID intervened with our plans and all other events had to be shelved sadly. In 2021, though, the Church finally marked the occasion properly with a grand Open Weekend, which included a specially-commissioned exhibition telling the story of the Church's beginnings and life in Victorian Putney. For more details, see here. 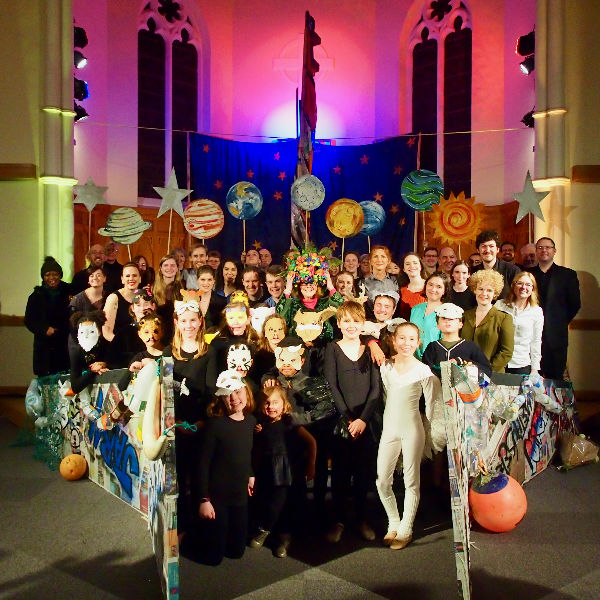