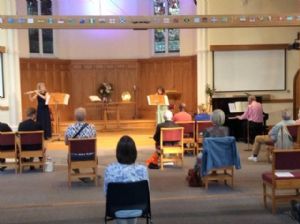 Putney Methodist Church were delighted to be able to host a live concert last Saturday, the 19th September.

A socially distanced audience enjoyed the concert which also raised funds for the Wandsworth food bank. The Arminian Ensemble (flute, violin, organ and piano) played a selection of solos, duets and trios ranging widely from JS Bach to Tango.

Probably the audience’s favourite was a medley of film melodies arranged by one of our pianists, Roger, which ended with the James Bond theme as you have never heard it before! Due to the wonders of modern technology we were able to include an organ solo by Jonathan, even though he is currently living in Zürich.