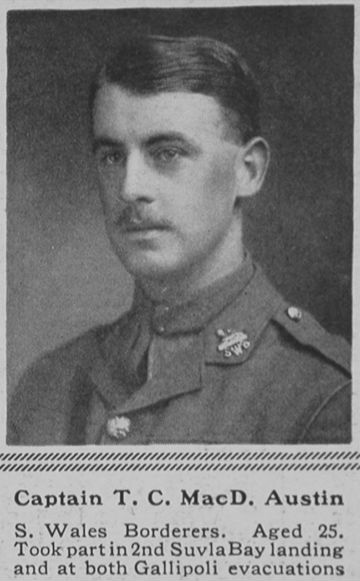 Captain Thomas Carnelly MacDonald Austin. South Wales Borderers, 4th Battalion, aged 24.
Several relief efforts failed, at a cost of around 30,000 Allied killed or wounded. Ottoman casualties are believed to have been only around 10,000. British leaders attempted to buy their troops out, and T. E. Lawrence (of Arabia) joined a team of officers sent to negotiate a secret deal with the Ottomans.

Mentioned in Dispatches for service in Gallipoli. Died 9th April, 1916. Captain Austin was born in 1891, son of the Rev'd George Beesley Austin and Mrs Ellen Austin living at the former manse at 61 Rusholme Road, Putney. The Rev'd Austin was Minister of our church, then known as Putney Wesleyan Church during 1910-15. Having survived Gallipoli, his battalion was then transported via the Suez Canal in Egypt to continue to fight the Ottoman Turks in Mesopotamia (modern Iraq) and became involved in the tragedy of the Siege of Kut-al-Amara, a town on the river Tigris 100 miles south of Baghdad. He fell during the second attempt to relieve the siege, and is buried at Amara War Cemetery.

Three weeks later, the British garrison surrendered – the single biggest surrender in British Army history at that date. After the British Army surrendered on 29 April, 1916, the survivors were sent on a death march of 500 miles via Baghdad and Mosul across Mesopotamia and Turkey to PoW camps in Smyrna (Izmir) on the Aegean coast with little food and even less medical care. Only around 30% survived the march. In 2003, following the Gulf War, US troops restored the cemetery in which Captain Austin was buried, and it was rededicated by an Anglican bishop. Sadly, within a few days, it was desecrated again.

The Siege of Kut

There were initially around 12,000 British and Indian soldiers in Kut. There were some forty thousand Turkish soldiers in the trenches that surrounded, armed with German guns. 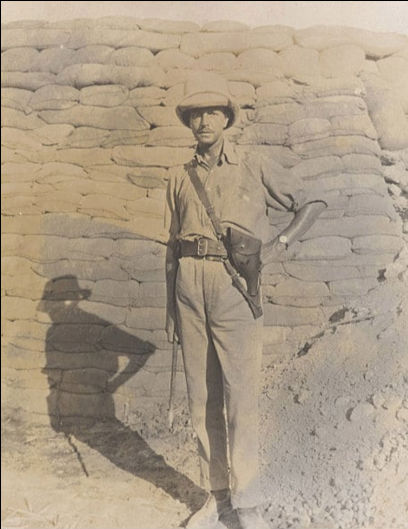 The British offered £2 million and promised they would not fight the Ottomans again, in exchange for Townshend's troops. Enver Pasha personally ordered that this offer be rejected.

The British also asked for help from the Russians. General Baratov, with his largely Cossack force of 20,000 was in Persia at the time. Following the request he advanced towards Baghdad in April 1916, but he turned back when news reached him of the surrender.

General Townshend arranged a ceasefire on the 26th and, after failed negotiations, he simply surrendered on 29 April 1916 after a siege of 147 days.

Jan Morris, a British historian, has described the loss of Kut as "the most abject capitulation in Britain’s military history.

Around 12,000 Allied soldiers survived to be made prisoners. 70% of the British and 50% of the Indian troops died of disease or at the hands of their Ottoman guards during captivity. In contrast, General Townshend himself was taken to the island of Halki on the Sea of Marmara, to sit out the war in relative luxury.